Al James. What can I say about this man? Everyone on the Portland scene or of like-mind are huge fans of his indie-folk-rock melancholic meditations.

Last year, his band, Dolorean, released an album, The Unfazed, which received a lot of praise in the music mags and blogs; however, for some strange and unknown reason, I didn’t. And, for that reason, I have brought a lot of shame upon Common Folk Music’s head — namely, mine. So, to rectify this gross mistake, I asked Al to write CFM’s next installment of “Songwriter’s Point of View”. After all, I do love The Unfazed. I’m listening to it right now as I type completely baffled as to the reasons why I didn’t write something about it because it is a terrific album. But, I guess it doesn’t matter now because it’s time to read Al’s musings on a beloved indie-folk eccentric and his controversial album…Well, let’s just say, Father John Misty’s Fear Fun, was just that for Al. 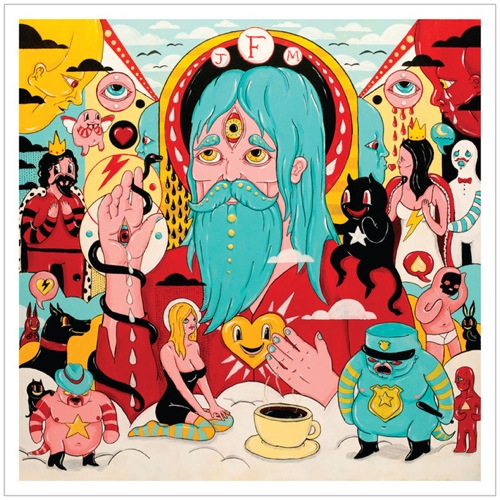 Rather than attempt to pick apart an album from the past, turn back the emotional and analytical clock in my mind and write about it from a songwriter’s point of view (obvious choices for this exercise would be anything by the Great Michael Hurley, Damien Jurado’s Waters Ave S, Gene Clark’s No Other, Richard Buckner’s Devotion + Doubt or Dennis Wilson’s masterwork Pacific Ocean Blue) I feel compelled to write about the one album that I have been wrestling with, obsessing over, sobbing to, drinking alongside and fucking to for the last six months – Father John Misty’s Fear Fun.

Longtime friend Josh Tillman sent me his latest album Fear Fun as a download link in November of last year and my love was immediate. I fell hard for Misty from the glorious opening chorus of the first track “Funtimes In Babylon”.


“I would like to abuse my lungs. Smoke everything in sight with every girl I’ve ever loved. Ride around the wreckage on horse knee-deep in blood. Look out Hollywood here I come.”

Unbelievable. The first line again. “I would like to abuse my lungs. Smoke everything in sight with every girl I’ve ever loved.” That’s the entire human experience (at least mine) in one couplet — self-hatred, self-indulgence, lack of self-control, everlasting love of all past and future lovers, self-exploration of the infinite through drugs and other substances, impending death. It’s all there.

If you’ve been reading all the music rags/blogs/tweets, you’ve heard Misty’s story — bored with drumming as an uber-successful Fleet Fox he moves down to L.A. to drug it up alone in the Canyon in hopes of discovering new levels of creativity, humor, sex, enlightenment, wordplay, etc…and, gawdammit, he pulls it off beautifully. His past as a suicidal, breathy balladeer (It should be noted that I am still a fan of his older work as J. Tillman) disappears in a flash of light and JT2.0 emerges as Father Fucking John Misty, the heir apparent to the scuzzy songwriting crew that was lurking around Los Angeles in the early 70s (Nilsson, Waits, Newman, Wainwright, Young, Crosby, Cooder). Sorry, (insert your fave contemporary L.A. country rock band or gentle West Coast hippie songwriter) but Misty’s view of the City of Angels is one that no one else has been able to nail for decades — the heartbreak AND the humor, the sadness AND the joy, the love AND the depravity, the chaos AND the solitude. Fear Fun is chock-full of sly grace, genuine bravado and naked honesty — three things sorely missed in contemporary songwriting (of which I, as a songwriter am guilty of).


More than anything, Fear Fun documents a personality crisis solved — a break from an old way of living/doing/dying and the discovery of a new singing voice, new lyrical vocabulary and utter freedom from expectations. This is why almost every other songwriter that I know is horrified by this album. It is what every songwriter hopes for, but is scared shitless to attempt. (Damien Jurado being the only exception. He has been reborn in a different way than Misty, but has undergone complete transfiguration as an artist nonetheless). For me, Fear Fun isn’t only about great songwriting (It’s obvious Misty is in complete control of his writing and album production/song arrangements). Its importance to me is simply in its existence, in Misty’s existence. It’s the rebirth that matters to me as a songwriter. How do you make the leap? How do you re-wire a heart and an ego? How do you look at financial success and pre-existing band cred in spades and put a fucking bullet in its head? How do you kill a name? Kill yourself as an artist?

If it’s becoming apparent that Fear Fun means a lot to me, well it does. On New Year’s Eve Day I sent Misty and a few other friends a new song written on a $200 Champagne binge captured on a crumby garage band session – “What Could You Do?”.

Is the song any good? Who cares? Doesn’t matter. What’s the point? Fear Fun has changed the way I make decisions, the risks I take, the honesty with which I write and you can’t ask for anymore than this in an album.

But what about Misty’s twitter account? His interviews? His stage banter, Sammy Davis Jr. inspired Japanese whiskey adverts and appearance on Letterman?

I love them, but they don’t mean shit. Fear Fun is all that matters to me right now.

2 thoughts on “The Transfiguration of Tillman: Ramblings by Al James the Unfazed”